This game was basically how I thought it was going to be Asteroids but with multiplayer and items. Going into this game I knew I required some others to play so I had my girlfriend and nephew come play with me. They have never played a game like so even with the simple controls it was still tough for them. The game does not have any single player mode just options for different types of multiplayer modes. Which includes a Classic, Party, and Chaos modes. All these modes are pretty solid but the Chaos mode is the home run out of all of these with areas that have hazards, close spawns, and a ton of power ups. This is the mode that I found the most enjoyable with my family and I can’t wait to try out with more people once I have more controllers. Having only 1 set of JoyCons and a Pro Controller isn’t enough since it lets you play with 6 players so I need a lot more controllers to fully enjoy this. The computers are no joke though even on easy they are tough to defeat. This game is pretty fun only issue I found is that the best mode requires a ton of people and a ton of controllers. Controllers are currently not cheap even with the JoyCons split apart you are looking at $150+ to enjoy the best mode with 5 other friends.

For you icon people:

I said it in the headline but this game is basically Asteroids meets multiplayer. It is great fun if you are into that but can be really tough for people who don’t understand the controls completely. It is great that the game lets you “Warm Up” each time you go into multiplayer so new players can test it out for controls but even with that I doubt anyone can pick up and play this game.

There are a few modes in this game as well. Classic is just simple maps with some power ups and really far spawns so you don’t spawn right next to someone. Party uses the touch screen which I don’t recommend due to only being on the small screen so playing 4 players is a nightmare with everyone’s fingers on the screen. It is great with controllers since it has small maps and they are simple to understand. Chaos is my favorite mode being 6 players with close spawns and a ton of power ups. 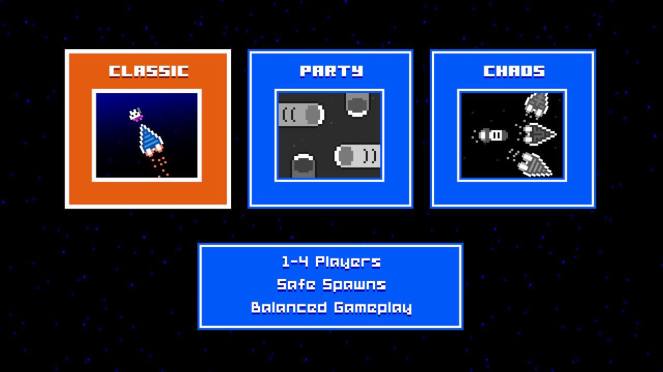 I had a pretty good time with it the majority was just with my girlfriend since we were at Comic Con but it was good fun. My only issue is that it is tough as nails for new people to gaming so I highly recommend only playing this with people who understand how to play games or at least have played games from time to time. Sitting down and trying to explain controls after we just had a warm up is a pain to work with. I enjoyed playing it alone since the computers are tough so even though it isn’t a single player game I had a great time just fighting the computers. They understand a lot even on easy and hard is just way too hard for me and I get taken out right away. Even when it comes down to one on one it is always one sided. 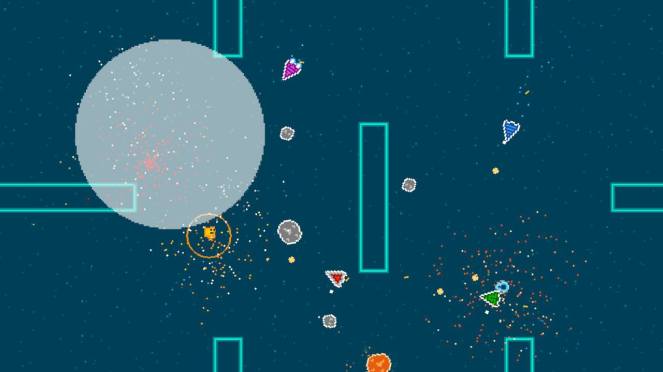 Wait for this to price drop! I would say it is great for the price if you have the JoyCons already and since some time has passed it would be a fun game to have but currently I would say at $10 it would be great if you only have 2 sets of JoyCons but if you have 3 Sets of JoyCons or a few controllers either from 8BitDo or Pro Controllers just buy the game it is great fun with friends.

I would give this game a 7 out of 10! It really requires more than two controllers to be fully enjoyed which is a bit much for an early launch window game.

First review after Comic Con which was amazing by the way! Picked up a ton of stuff and met a few great people while I was there. Green Gamer’s first review will likely go live on Weds along with several other reviews that I worked on while at Comic Con. As you likely noticed I had to delay some reviews from last week to this week due to having no internet at the hotel for my Switch. I was unable to send over any of the screenshots or download any new games so most of my work went to a crawl. I did pick up an amazing calendar that I will share with you guys here:

As you can also see Astro Duel got bumped to late Sunday due the review being worked on at Comic Con with my girlfriend. Wasn’t sure on Thursday when I was transferring everything to my new calendar.

It also hints to the stuff I am currently working on so look forward to those. So thanks for reading and enjoy! Make sure to follow me on Twitter and I have some great news coming this week on video reviews!