So this wasn’t what I thought it was…

I was pretty surprised at how much I am enjoying this game. It isn’t fleshed out, it doesn’t have a big story, but the mechanics of the game are pretty fun once you get used to it. Being a Puyo Puyo Tetris lover, it was hard not to see this game and think nice another puzzle strategy game. I went into it only seeing the trailers and remembering how nice it looked on the Japanese eShop and wondered when we would get it. The game is a difficult game to just pick up and play. Looking at trailers you will likely not understand it unless you look at the trailer several times. I go further in-depth in the full review but believe me this game will take at least an hour or two to fully understand. The “Controls: How to Play” is highly recommended and then go into Easy Mode to take it slow before you just into the standard mode. This game also has online but good luck trying to find someone to play… I believe it is region locked when it comes to online because I haven’t found a single person to play against. I’ve had the game searching for almost an hour and nothing. It does have local but since the game is already hard for a person to understand it would be tough to teach someone and enjoy the versus mode. I tried it out  a bit alone since my girlfriend didn’t understand at all but I think it would be a lot of fun since it is a lot like Tetris where garbage comes from the bottom if you land a combo.

Icon for you people:

The game starts off explaining the story which is simple. Here is a screenshot of all of it: 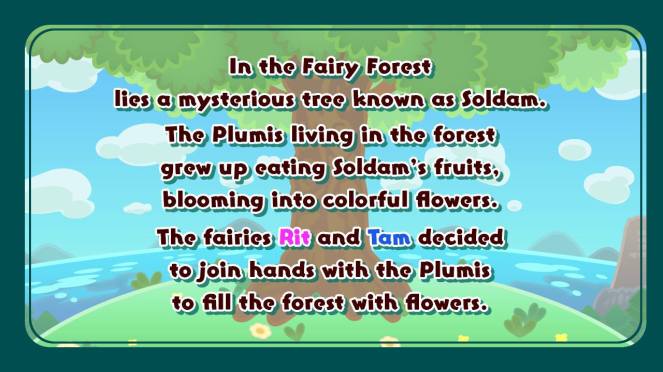 Yes, that is all you need to know. Pretty straight forward and simple.

Now this one is tough cookie to explain but it is a lot like Tetris but with Reversi. You clear lines by making a line the same color, say Red, and once you clear it. The color now becomes the bottom row. This sets up the Reversi gameplay so now when you have several fruit that are green in a horizontal row and you place a Red fruit on top and all the green fruit will turn red. This enables you to combo if you set up something correctly. That isn’t all though it is possible to change colors diagonally and vertical depends on where the fruit is placed. You get a block of four of different colored fruit with each turn and you have five vertical rows that you can place the block. So just like the other example if you place these blocks in the middle and set up Red fruits on the edges and you place a block with red fruits on the sides it will change the fruit horizontally. As you can tell this game is incredibly hard to explain to someone but after you understand what to do I found the “Original Challenge” mode to be great I got close to level 100 out of 200 but the game just like most puzzles games speeds up very quickly or has short bursts of speed that will throw you off.

Here are some screenshots and some explaination: 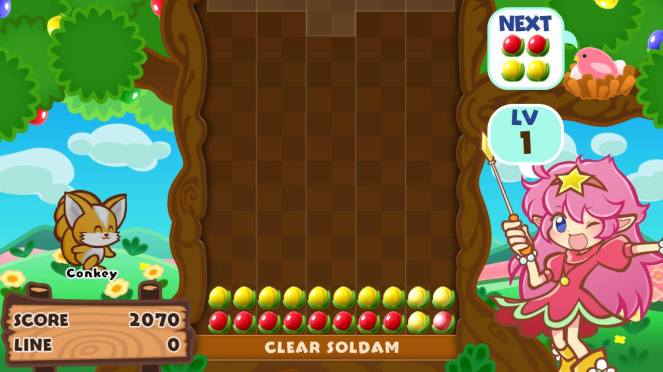 Before you clear a line and after to show that the bottom row now has changed to the cleared color.

This is how crazy the game can get:

The game does offer a few modes like standard Soldam, Easy Mode, and Challenge. I love playing Soldam since it gets the same feeling as Tetris but a little bit more complicated. You really have to think on your toes when things speed up. Easy mode is great because it lets you plan before placing so you are in no rush to figure something out. There I like to work on combinations and see what works and what doesn’t work well. Challenge is a mixed bag since some are tough as nails to figure out while some are straight forward. I didn’t get many cleared but jumping around through them I can see how easy some will be once I get to them. Multiplayer mode is a bit of a wash… I would love to try it out so if someone wants to play online let me know but currently no one plays it. Not a single person as far as I can tell and it is a shame since just like Puyo Puyo Tetris, it has the potential to have a great versus mode.

There is a small collecting aspect of the game as well with the ability to collect little animals. These are unlocked depending on how well you do in Soldam’s standard mode the more fruit and combos you do the more you unlock. I’m not sure exactly how they unlock but I feel as though they are pretty random. Nothing too exciting but a nice touch since you can change them out in the main menu.

At first I had no idea what to expect and it wasn’t until several hours in I really had an understanding of what I was doing. It is a fun game but my biggest issue is the online…. no one is playing it online which is a shame since I would love to try it out since I have no one good to play against. I think this would be a fun game to play online but since no one is ever playing I couldn’t even include it in my review. My girlfriend doesn’t understand how to play and it is already a weird game to teach to someone. Looking at it, it seems pretty simple but I found it very difficult at first.

Wait for a price drop…. If you are a collector I would pick this up as soon as a sale hits since it seems like a game that will end up pretty rare later on. I really enjoyed playing the game but I can’t justify the price if the physical release was $30 I would say go for it since it is an interesting puzzle game. The game just needed more to do… I spent a lot of time just playing Soldam but a story mode would have been great and a computer versus option.

Your Princess is in another Castle! Sorry guys still pretty busy trying to get these out so I’ll just keep things short here. I did get an Elgato in the mail so you guys can look forward to video reviews and gameplay in my reviews likely starting the end of the week or next week. I’ve been playing around with it but it is a little bit more complicated than just plugging it in and working. Box really does lie about how easy it is to use this sort of device.