This was a surprise for me since I knew this company existed but never thought they would want to contact me to review games. I just saw the video over at 8-Bit Guy’s YouTube Channel unboxing and playing a few of their games when I checked my email to find an email from “Mega Cat Studios.” I was shocked to see that they were trying to get in contact with me to review these games.

Log Jammers was an interesting concept but an average game playing alone and it requires a controller. I had a great time playing with my nephew since the game is simple to explain so anyone can just pick up and play it. The issue I found was the lack of explanations for the power ups. I know in the manual they explained all of this so it makes sense that it isn’t in the game but it would be great to see a page explaining what they do. The game has a Mortal Kombat style tower in the shape of a tree that you must defeat a cast of characters to fulfill your reasons behind entering the tournament. Each character has a short story on their profile picture and stats. The game is fun being a goal shooting game but with axes that need to pass your opponent to score a point. This game was pretty good for what it has to offer. I’m not sure if anything will be updated but the inclusion of a page explaining power ups and a short introduction to what is going on before the title screen would be great before the Switch release. 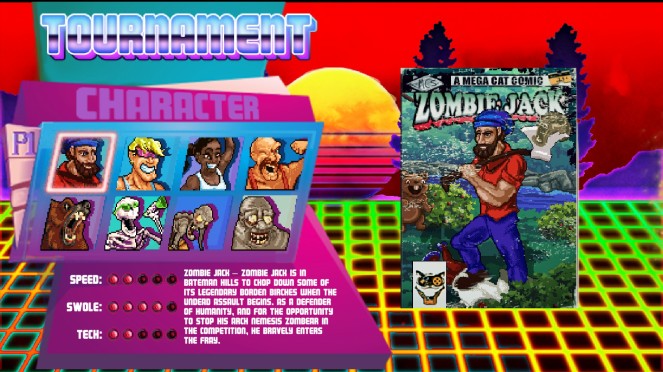 Coffee Crisis…. this was the game I couldn’t wait to play. The game on Sega Genesis already looked fun so seeing it on the PC made it much better. It would be great to get both when the Switch release comes out but I know that is asking for a lot. Coffee Crisis is a beat em’ up and a good one at that. I do love beat em’ ups so I am a biases toward the genre but it does have some slight issues. The game is great so going to get that out of the way and I can’t wait for the Switch release since this was a game that my nephew and I played until we finished it. This game is another game that I would say requires a controller but I did run through the game with keyboard and mouse first. The game is silly and I love it for that. It is about aliens invading and a coffee shop is trying to defend the world. Need I say more? What is even better is this game takes inspiration from a real coffee shop and city. Black Forge Coffeehouse is a place you can get coffee from in the real world if you live in Pittsburgh, PA considering how I am not far from there I would love to visit the coffee shop. My only issue with this game is how much health the enemies have in one player mode… sometimes they feel like they take forever. Certainly the Old Man that attacks you in level two. This wasn’t an issue in two player mode so it seems to cater to that side, over the single player experience. I didn’t mind the repetition but I think other players may have some issues with it. Running the game two players was great though since it isn’t a long game but the comedy and silliness kept my nephew entertained the entire way through.

There are no icons as of yet but hope for a Log Jammers one with the Zombie Bear and the Coffee Crisis one with Nick and Ashley on it.

There is no story in-game but there is plenty of information on their website. I know that the physical release of Log Jammers on the NES does have story information about all the characters in the supplied manual. So just going to rip this from the website and link to it if you want to know more. Log Jammers takes place in Bateman Hills, a town known for their lumber and mayo industry. It has a dark secret though the mayor is hiding a mass amount of murders just to keep his town’s reputation high. Then one day souls returned to their bodies and the deceased now become the living once more. The mayor finds out about this and strikes a deal with them to keep the secret under wraps and the tournament begins. The prize being the town itself if they can defeat the mayor!

This game has a pretty funny story. I was surprised that this one has full cutscenes that are included in the Sega Genesis release as well. Nick and Ashley are the main characters and aliens have invaded the earth for metal music, coffee, cat videos and wifi. Yes, it is as silly as it sounds and the cutscenes expand on it a bit more. Nick and Ashley leave their coffee shop to find out that the entire world is being invaded and they try their best to fend off their area. They meet crazy characters like old men that poke you with their stick, old ladies using their walkers to attack you, the men in black, cowgirls, and clones. 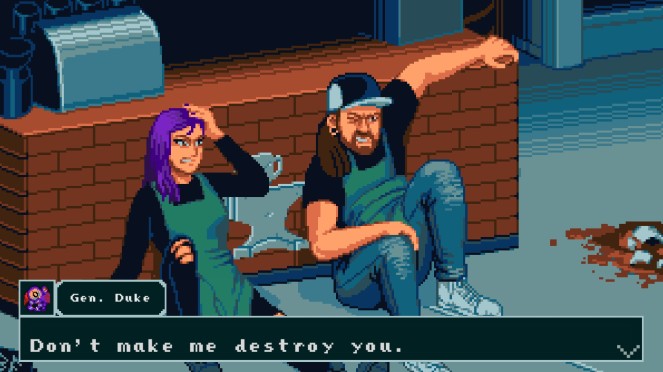 Log Jammers is the interesting game since the goal is simple get your axe behind the opponent to score a point. You do have power ups that shield you, make you throw all your axes at the highest speed, and use your special ability that depends on what character you pick. I liked the Tournament Cheerleader mode the best since you get a number of blockers behind that you need to kill to score points. The game lets you throw your axes in another direction but behind you for obvious reasons. There really isn’t much to say about this game since it is what it is so watching any amount of gameplay will give you just as much information as I have.

Coffee Crisis is a Beat Em’ Up and as one you will fight wave after wave until you beat the game. That isn’t a bad thing since there are several stages that look amazing and the enemies do add one to two each stage so you will be fighting a lot of the same things. I never found it an issue since all the enemies have weird attack patterns that you will need to learn if you want to beat this game in single player. This is a game that is pretty rough but it caters to people who have played these games in the past. Much like my Wulverblade review, you have to go into this game with some idea of how rough beat em ups can get. The game doesn’t get extremely hard like NES or Genesis but if you aren’t careful enemies will gang up on you. This was the most realistic fighting I’ve seen from a game since most games will take the easy route of only letting a few enemies attack you while the others stand around waiting. If there are 4 enemies on the screen they will all try to attack you and they will easily combo you if you aren’t careful.

Both games are pretty solid and both I love played with my nephew. Outside of the minor things I mentioned throughout the review both are fun games. There is no argument there but it really depends on the person if you will like it or not. I personally loved Coffee Crisis and it was a game that I knew I had to play second when reviewing these games. The Switch versions will definitely be the best way to play these because of the JoyCons. I can easily see myself playing through Coffee Crisis with friends and Log Jammers is a great game for people who like that sort of genre or want some silly fun with their friends. 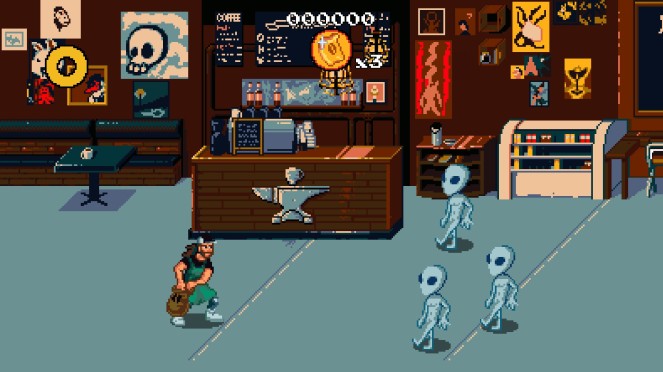 Log Jammers is an interesting concept but need a little clean up before the Switch release and depends on the price of the game for me to say a solid yes or no. If it is $10, I would say wait for a sale unless they add a screen explaining the power ups and a short cutscene before the title screen about what is going on. At $5, I would 100% say go for it since it is a nice two player game with friends and the Switch version would make it 10 times easier with friends.

Coffee Crisis on the other hand, is a great buy for anyone picking it up. Even at $10, I would say it is worth it with its silliness and story. The single player mode does need some sort of rebalance but even without the balancing issue, it is a great game. I would definitely recommend this over Log Jammers but remember I am biases toward Beat Em’ Up games. Everyday I would pick Coffee Crisis just because of the genre of the game.

This was an interesting week since this will be my first PC review which hopefully ends up turning into a Switch review down the line. I have been at PAX all weekend and been taking a ton of pictures so if you follow me on Twitter you will see all the pictures and if you don’t follow me… you should 😀