I am the type of guy that owns a racing wheel and sits in front of my TV playing racing games so when I saw this game it reminded me of the good old days. Having a SNES or Genesis controller and playing Super Off Road and Rock n’ Roll Racing. This game is about you, your car, and how well you can drive with the occasional boost gauge that may flip a second place win to a first place win. The career mode is where I found the most enjoyment but looking at the current top lap times makes me think that something is busted. It didn’t bother me that a person was able to get a 6 second lap over my 30 second lap but that may bother someone else. Career mode has a variety of events that you need to do which are all common in other racing games like race, time trial, knockout, and unique mode that gave points depending on what place you were in the race. The online is questionable, it does support cross-play which I am 100% for but there are still not many people playing this game online which is a shame. The game has a great online mode but no one is on it. I typically could get a few people playing at any given time but filling up the entire match took a while. I would love to recommend this game but given how very few people play online that maybe something you want to consider before jumping all in on the game.

Simple icon so nothing special:

There is a career mode but it doesn’t give you a real story.

Career which I talked about in the short review is the best part in my opinion because you get to experience everything the game has to offer. You do need to run through career at least once to unlock everything. You will unlock cars by gaining a certain amount of experience and money to purchase your next car. All cars feel slightly different but the upgrades is where things will really expand and change up how your car feels. Career will also make you unlock cogs which will unlock more progress in the career since some parts are locked off until you get a certain number. There really is nothing crazy to talk about when it comes to gameplay since it is a standard racing game with no gimmicks. It is a solid game that put the racing part of it first before anything else. The game does offer a number of tracks but considering how long career is, you will run out of maps very quickly. Hopefully they add more in the future or we get a second game with twice or three times as many maps.

This is the best part of the game in my option…. playing the game while drinking. Much like Mario Kart it easily makes a great drinking game with plenty of rules depending on who is playing with you. I found all the different modes to be nice but felt as though the basic races were the best with friends. Having 4 player split screen is a great when not many games support local two player modes. It is great that this game has 4 player but I do wish we had an option for a two console 8 player versus mode. I know that is asking for much but this is a game I would love to play with more people just like with Party Golf. 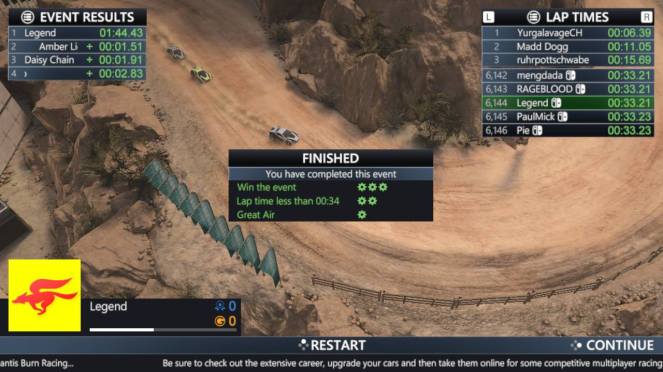 I would say go for it if you have an itch to scratch for older racing games with no gimmicks. Just know that barely anyone plays online and the people that do play online are very good players. It is a shame not many people are playing online because it is a great racing game.

My giveaway is still going on so please check that out!

SO IT BEGINS ROUND 2 OF THE GINGER BEYOND THE CRYSTAL GIVEAWAY!

Once again I thank @BadLandGames for providing codes to giveaway!https://t.co/yG08SFwlqz