Glad to be back…. old friend! 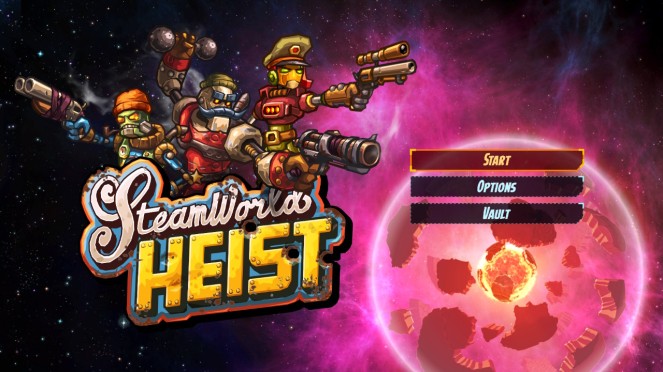 Buy it…. If you like Steamworld Dig 1 or 2, go for it. The game does have massive spoilers if you haven’t noticed by the start screen. ImageForm was put into a weird situation for the series on the Switch. Dig 2 has been out for a while which takes place in the middle of the series, Heist which takes place at the end of the now trilogy, and Dig which explains everything comes out next month. The Switch definitely got a weird release timeline and kind of sad if anyone wanted to play from beginning to end. I was shocked to find out that Dig 2 ends with kind of the beginning of Heist. I hope to see the return of our characters in Dig 3 but that will have to wait. Heist is a tactical RPG about Captain Piper and her crew. You will recruit new members and able to buy new weapons. The unique thing about this game is the aiming to do damage so if you miss and enemy, it is your fault. The concept is great on paper and works excellent depending on which style you play. Handheld this is great since you can auto aim anywhere and know it will make contact since you know where the gun is aiming. Docked is a different story, it is easy but on harder difficulties it is best to play this in handheld. Ultimately the DLC gives a bit more for you to do but I found the base game alone to be worth the $20.

Great icon which shows everything you need to know:

It has been years since the explosion of the planet and Steambots have fled to space to find water. Captain Piper was going to have an easy looting but things fell apart and lost most of her crew. Now she is trying to recover what she lost and help out the Steambots that have been overrun by others seeking water. Scrappers have been taking water from everyone and causing a massive issue for people so Piper steps up to right the wrongs.

Like I said in the short review the game is a Tactical RPG. You will need to do manual aiming but you have the option between two types of movement. Each turn you get two phases either a move and shoot or dash which takes up both phases. If you choose to move then shoot, you will have to aim your gun or choose your skill for the turn. This is where things can get interesting since aiming is life or death. On the hardest mode it can easily cost you the perfect score and value resources. As any RPG you will be able to equip many different weapons and in this game you have the option of having different hats. The hats don’t do anything but cosmetic but if you shoot them just right they fall off your character or the enemy characters. Each mission you will pick up loot, kill a set number of enemies, deal with turrets or enemies respawning, or bosses. After each mission you will find out what loot you picked up, go back to “bars” to buy new weapons or buy a new character. You do level up depending on which characters survive the entire missions. Some missions will be solo, duo, or triple characters but you do have the option to bring less but that is highly not recommended.

SteamWorld was a series I never got until Heist. It was the first game I played a long time ago because it looked different and I was right picking it up. I was lucky enough that Brjann (CEO of Image&Form) sent me over a review copy of SteamWorld Dig 2 so once this was announced I had to email him again. I had never played the DLC and the extra missions and end boss were great. I do love seeing “the outsider” again but now it just makes me crave a sequel to Dig 2. So hopefully that is in the pipeline along with an Amiibo for a physical release! I have no issues throwing more money at these developers and recently heard that they created a new company with Zoink, the company that made me want to review games. I can’t wait to see what comes out of them now.

This isn’t my first time playing this game and it likely won’t be my last. This is a game that you really should own if you love the Steamworld series or want something that requires a bit of aiming skill in your tactical game. I highly recommend this game!

Whew! Long week and tons of reviews! I have several backed up for this week and Pedro is working hard. We will be doing another giveaway on the Nintendo Subreddit this time so look out for that. As always keep on playing until you hit that 100 hours and let me know what other games I should review!