Just saying don’t play this while on the can…

Qbik is an interesting game but first thing’s first. Do not play this while going to the bathroom…. As weird as this game is at first. When I first started playing I noticed the character makes a strange sound that could be confused with releasing gas. It isn’t loud enough to be a problem but interesting that after each level or each time your character talks he makes that sort of noise. The game is a pretty standard puzzle game with the premise of moving your character around to eat dirt, move blocks, and clear all the edible blocks. The best part about this game is that it doesn’t hold your hand. Booting up the game it seemed pretty easy and straight forward but as I finish the first two chapters the puzzles started to get really hard.  The rest of the game stayed at this difficulty of no longer being a mindless puzzler. The story of this game is a bit odd since you only get around maybe a page worth of information and each chapter gives you about two lines of text. What I have pieced together is that it is about people having issues with space and your character is making more space for people. I would say this is a game to recommend, it presents a easy to learn tough to master style and for $5 you are getting a whole lot of game.

To be honest I hated this icon at first but then noticed it was just the main character: 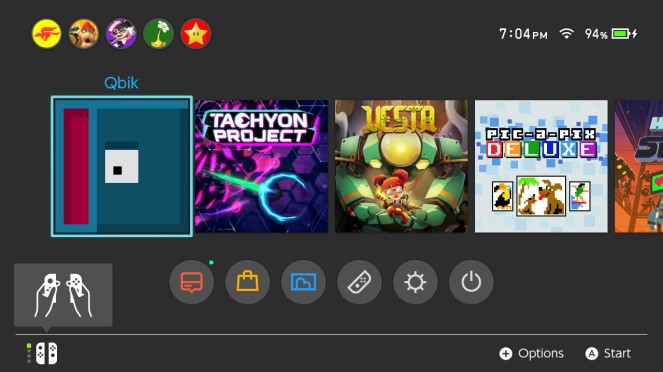 A bit vague since each chapter gives you around 2-4 sentences of text and the entire game is summed up in about a page. I came out of it thinking it is about a world where people complained about not having space. So your character is trying to make more space by eating dirt so there is more space. I like to think of it of Wall-E but if the humans stayed. I never see anyone outside of my character so I’m not even sure if anyone else is alive.

The game is fairly simple you have to clean up a certain area with your character by eating dirt. You are required in each stage to eat a certain amount of special blocks. After you eat the blocks you get a quote that always seems to reference another game like I’ve gotten “We have to find Vault 13” a few times. This is an obvious reference to the Fallout series. The game has an editor which I didn’t bother with just because I have never been good at making anything like this. Qbik keeps track of all your progress, deaths, restarts, and undos. By the end of the game I am guessing that undo for most people will be very high.

To be honest I haven’t beaten this game. I have currently put around 10 hours into the game and out of the 7 chapters I am currently at the final one. It is pretty tough and every time I beat a stage, I feel dumb about the solution. So either I am pretty bad at the game or my knowledge of these types of block pushing and eating puzzles is terrible. I remember being stuck on an early puzzle for a good half hour. Then I remembered all I have to do is place the block above the others and eat the blocks until the moveable block was on top of me. Move to one side and push it to the ditch to finish the stage. Puzzles like that really killed my time in this considering the game only has about 60 stages… it shouldn’t take someone that long. I might just be bad at some sections of this game.

Surprisingly I would say for for it! The game presents simple controls but complex at the same time. The trailer really shows the later stages that I don’t cover in my gameplay footage which is just the early stages. I would love to see a sequel down the line with a bit more story since the little snippets that do give make me want to know more. The puzzles can be a bit tough and I love puzzles so I do consider myself at least average at puzzle games. There is really no negative for this game outside of the weird sounds it makes after you finish a stage. I really would love to know why did they pick those sounds to end the stage.

Will update when I get a chance to record!

Another week down! This is going up a bit late but I had a personal event to attend all day yesterday so I was unable to get to my computer to finish edits and upload the final version. This week should be a bit more jam packed I got several reviews down this weekend and last week because of report cards and extra day off.