Just read the full review since it isn’t much… seems to be a common theme with Somtimes You games. 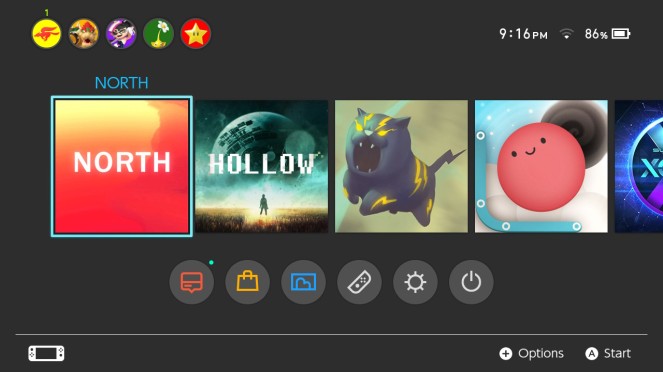 The story… it is a weird one. It focuses on an unknown person moving to the city and I believe he works at the asylum. He writes to his sister telling her that he hopes to make some money and then she can move in with him. The entire city is under some sort of zombie like state that worship a giant eye, cameras watch your every move, and people believe your character is stealing. That is about half of what is going on since going further would spoil the end half of the story. It is very odd and I’m not even sure what to make of it. I’ve played the game several times now and still don’t understand.

NORTH is a very odd game as it is a game that can be beaten within one sitting and doesn’t have any way of saving. There are only a few things you can do in this game, interact with things, use them and write letters to your sister at home. While at home you will find pictures explaining what kind of world you live in and talk to a few of the NPCs. When you are in the city you will do your job which is collecting a few items and write letters to your sister. Writing letters progresses the story and tells you what is going on but the game doesn’t explain how to do anything. I ran around for about 15 minutes before I saw I could write letters. The game really is a “where do I go” type of game and drives me nuts. I just wish things were better explained as they were happening. The letter sending mechanic isn’t even explained yet they tell you right away that it is very important.

I didn’t like it… It is odd, too much time spent trying to figure out basics, and story is mainly small things that focus on what to do next. By the end of the game I felt just as lost as I was in the beginning. I think you already know how I will feel for the final thoughts so I’ll keep it simple.

This is an easy pass for me… The game is rather short once you understand what to do. There is no explanation of what is really going on or why it is going on. None of the characters are likable and explained well to care about them. For $3 I wouldn’t even say it is a worth trying out like many of the Sometimes You games they are cheap but good for the price. This isn’t one of them so unless it becomes $1 or free, don’t bother checking it out. Might be best just to watch a complete play through if you are interested.

No trailer for the game!

Hmmm this game was a very odd one to review because it is different from any of the games I play. I thought it was going to be a visual novel style game that I let it play itself but it wasn’t which surprised me. It really ended up being a where do I go type of games and since it doesn’t save… my first run took like 2 hours with a lot of stopping and starting.

I entered a giveaway for a free copy of Mercenaries Saga Chronicles for the Switch! Thank you, @CIRCLE_Ent https://t.co/JsvTDvFLNO