This is what happens when people want to replicate the Metroid formula but want to try something different. “A Robot Named Fight” is an interesting concept but wish it was better developed. I enjoyed being able to boot up the game and each time it was a different experience but wish there were some set seeded runs to choose from. It is possible to write these down and replay them but there should have been an easy, normal, and hard mode that were just three seeds the creator felt were solid runs. I loved the challenge as well since if you are not careful you will easily die but the game is fairly short for most runs I was able to complete. After around 5 completed runs I would say the average run will take you between 30-60 minutes. This isn’t terrible since I think I had around 20 runs that ended with me dying, mainly from me being overconfident. I would give this game a 7 out of 10, while I did enjoy the game I don’t think I will be going back to it very often.

The icon is pretty cool, I do wish it showed more of the Robot or the enemies: 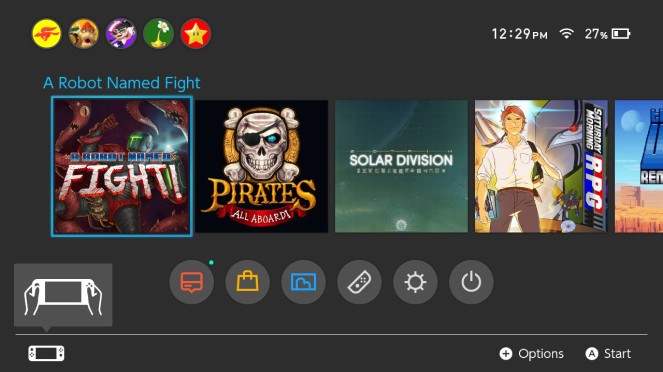 Surprisingly the story is average at best despite having a great opening. Higher developed robots have left the world and left all the lower level robots behind. One robots steps up when a orb like monster starts dropping its children onto the world. I really like this idea but that is all we really get until the end. I wanted to know more about this unnamed robot in the same way I wanted to know about Samus. What is this monster that has come to this world? Why is it trying to take over? How did it know this world wouldn’t have many defenders? A lot of things are unanswered that I wanted to know and why I wanted some seeded runs that were hand picked so more cutscenes could be added inbetween bosses even if it was just a little bit more information.

Playing this game is a bit rough to explain since unlike other MetroidVania style games you don’t start out overpowered. You start with the bare minimum with your blaster and have to go around collecting weapons or trading enemy drops to higher beings. Each time you die you will have to start over and the entire world changes as well. If you don’t write down your seeded run, you will likely never be able to try it out again. Every run has a few bosses and a few hidden items before you take on the “final” boss which is the monster that is dropping off its children. When you first boot up the game you will not have everything unlocked you will need to defeat a number of enemies, collect a certain number of power ups, or items drops to unlock an item that may appear in the next following runs. It is much like the Binding of Issac when it comes to the unlocking of future items. Besides that the game plays much like a Metroid game so you will do some platforming, take out enemies, and acquire new items that will help you reach the final boss.

I put way too much time into the first few runs as I would die for a lot of dumb reasons. I would fall into a pit of spikes and not easily get out then die after a few jumps. After a few runs I decided to take my time and slowly work my way through things then I completed my first run. The ending is pretty “eh” as it doesn’t explain much more than what the opening did like I said in the short review I wanted to know more about my character and the world. When I first started I found the controls to be a bit weird and didn’t feel exact. I would jump and some would feel right on the money while others felt a little floaty. I believe this was just my issue but if there were preselected seeds it would be easier to quickly get use to the controls.

I would say this is a great starting point for people who want a bare minimum Metroid title but it lacks the deep story and will require several attempts to complete. You will most likely not beat it your first try as something dumb will kill you. I’m not sure if this game was a solo job by Matt Bitner, the creator, but he did an excellent job considering how short the credits were. I hope he continues to produce video games because “A Robot Named Fight” is a great start and would be impressive to see a more story driven game in the future. I would like to give this game a 7 out of 10, while it is isn’t a perfect game it gives a lot to tackle. The lack of a true story mode, preselected seeded runs, and the awkward controls at first were the only reasons I took points off.

This was a game I was really looking forward to and it didn’t disappoint. It has an interesting concept with the roguelike style so I really look forward to what else he is working on. I would love to see a more story driven Metroid style game but wish there was a bit more like being able to select which items to appear or start off with certain weapons and do a boss room gauntlet. There are a lot of options I wish I could set up that would have been awesome to see in this game. Also…. I couldn’t take any screenshots in game which was a bit odd. I didn’t mention it in the full review but it was really weird not being able to take screenshots. I guess it was due to how short the game could be beaten but it means you can’t take screenshots of your run times.

One thought on “Nintendo Switch – A Robot Named Fight #143”