Fallen Legion: Rise of Glory is a very interesting game since reviewer’s insider tip… we got a document to help us learn the ins and outs of the game along with the review copy. It helped me to understand the game better after playing the tutorial since things move at first. The game’s split between two story modes as NIS America calls it, the definitive version of the game. It contains both Sins of an Empire and Flames of Rebellion but you can play them in any order. The game is one of those easy to learn but hard to master as you fight wave after wave of enemies. You can beat the entire game by button mashing. If you want to take on the “One Life” mode you will need to master the controls.

You have the leader of the group which can do a range of different spells. The rest of your group will be able to attack using one button. Then you can use the L button to block and with perfectly timed blocks, you can reflect attacks back to the enemy. While the story is nothing really to write home about which I will explain better in the story section of the review, the combat feels great… most of the time. I found myself early on pressing things until I got the right feel for attacks. Blocking is the hardest thing to get use to due to enemies having a range of attacks. Each new enemy you need to learn how to block their attack. Bosses can be brutal. They will take down your characters if you aren’t careful wasting revives and heals if you don’t play safe.

I would give Fallen Legion: Rise to Glory an 8 out of 10! While the game does combines two fun games both are lacking in some areas. The game explains things quickly and while in handheld mode, buttons icons can be hard to read.

I like the icon but do wish the “Rise to Glory” was a bit bigger: 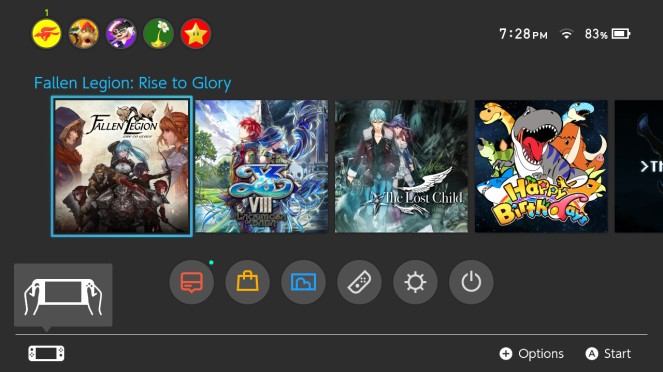 The story of both games play out much like Fire Emblem Fates as you control a different side of the war. “Sins of an Empire” you control Princess Cecille. “Flames of Rebellion” you control her rival, Legatus Laendur. Princess Cecille is not your normal princess, she is a warrior, she loves being on the battlefield. When her father dies she has to step up to take charge but would rather be on the front line. She is trying to cover what is going on in the kingdom while fighting a war. While Legatus is her rival and trying take back the land to overthrow the royal family. Alone each game give huge holes in story as you aren’t sure what is going on or why things are happening. Now that both games are on one cart, you get to see the story unveiled from both sides to give you a complete story. I found it best to play both games at once, going back and forth between them, or start one and then start the other then decide which side you want to see first.

This is when things get a little bit strange since the tutorial is straight forward but to me was quick. Within a few minutes I was alone to figure things out. I didn’t mind but sometimes we need a little bit more of a hand hold. Both games play the same so you don’t really need a refresher after you finish one side of the story. You will control a main character and 1-3 other characters that will use only a single button to attack. These characters are fairly basic and you will have at least one ranged unit and one tank unit.

During battle, units will have a set amount of attacks and must recharge overtime. You need to block attacks and perfect blocks will reflect attacks back at the enemies. Things get a bit strange if you are trying to attack with a unit and hit block before the attack comes out. It will stop the attack in favor of a block. This is great but they don’t explain this during your first battle. This had me blocking a lot instead of stringing attacks together.

Each battle plays smooth once you are able to see when an attack is coming and not mash buttons during battle. This is my favorite part being able to successful not get hit during a battle and rack up a high combo number. If you have full AP you can use a Link Attack which changes with each character. You have Deathblows and these are when your combo bar is full. These types of attacks can change the battle as Link Attacks will deal more damage. While Deathblows hit all enemies or many enemies at once.

You have your main character who can use spells if they have enough mana. These are very strong and should be held until you really need them. They provide high end attacks, healing, and reviving for units. After each battle you will be able to pick out a card to give you bonuses in the next fight. These include more damage, higher health, or restored mana. These aren’t necessary free though as your kingdom will judge you on these choices.

When you receive the choice between cards you will have to read what is going on in the kingdom. So something like “A General was seen being too harsh to protesters at the Church”, three cards will reveal themselves as Assist, Ignore, Recruit, etc with each having different effects to your units. When you pick a card you will have to deal with that consequence in the story. These play a huge role later on as they will change the story path you can take. This makes you want to play the game many times to see different outcomes.

I actually spent a ton of time playing this game, I’ve had it for about a week but did get sidetracked as NIS America sent me a ton of games at once. Being a solo reviewer here it is a bit rough to keep up with some games but man their PR is on point. I have more than enough time to work on everything and get them out on time. I was able to beat both story modes and the story is still a bit iffy. My biggest issue is the text while in handheld, it isn’t so bad on the big screen but sometimes it is a bit hard to read. I wish there was an option to make it slightly bigger but I got use to it but maybe hard for some people.

The game is a bit weird at first and for the first few hours and almost toward the end of my first play through, I still didn’t fully understand how to play well. Attacking isn’t a big deal but the game doesn’t tell you that blocking stops your attack and eats up that attack completely. While learning how to play and for the first hour or two I was attacking fairly slow because I would try to block everything. Once I got use to seeing when attacks would hit I was able to block better but by that point I was already half down done the game. The second run was much better which felt great

While both games are fun and I had a great time with them, it would have been a more enjoyable if the tutorial was a bit longer. It is rare to say something like that but things aren’t explain as well as they could be and the opening feels a bit rushed. I found it a bit odd that the story branches were told early on but unless you plan on playing the game again you won’t easily be able to get the other branches. This would mean at least two play throughs for each side. I was only able to get through it once on each side before the review needed to be complete. I loved the battle system once I got the hang of it but it is tough to master. My gameplay section barely scratched the surface to be honest, I could have written several more paragraphs on other things I left out. I would give Fallen Legion an 8 out of 10, for a great story that was well expanded by playing both sides of the story along with a battle system that made me watch to go even further on my combo. But as always games do have some flaws as the story could have been better told now that both are in one package and button icons are a bit tough to read while in handheld but look great on the big screen. I doubt they will update the handheld version with bigger text but it would be a great addition.

Note: I do plan on playing through the story once more for each side to expand the review slightly so I will highlight an “update” section and if my score changes.

Whew! This is over but it still needs a lot of work. I’ve been working a ton on these big games and just glad I got one of them down. Sadly (but not really) NIS America is not slowing down anytime soon with game releases and I received the next two months worth of big titles just from them. I know I am aiming to get many of these heavily prepped before they go live though. For me NIS America is one of my favorite publishers so hopefully we see a trilogy on the Switch for my favorite series…. Puhuhuhu. Playing through all the Danganronpa games on the Switch would be a dream come true since I’ve played 1 too many times and kept my Vita just for 2 and V3. I know Disgaea 1 Complete is coming in the Fall and I already have the CE preordered for that game. Well time to go back to working on [Redacted]. As always let me know what you think of this review, if you plan on picking up the game in the future, I’ll see you in the next review!

One thought on “Nintendo Switch – Fallen Legion: Rise to Glory #153”