Another where do I go sort of game… 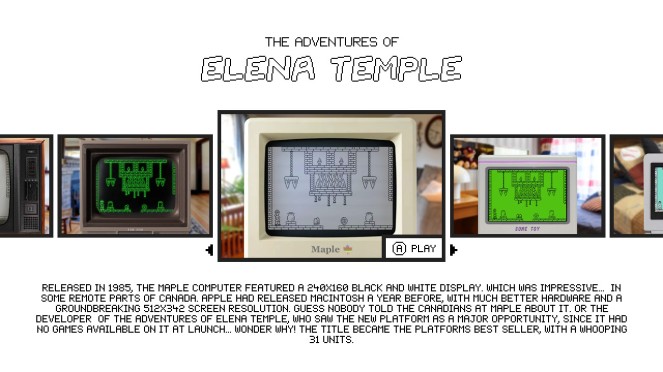 Pretty short review so just check out the full review, I gave this a game a 7 out of 10!

The icon is pretty cool and love that it shows some of the different styles you can pick: 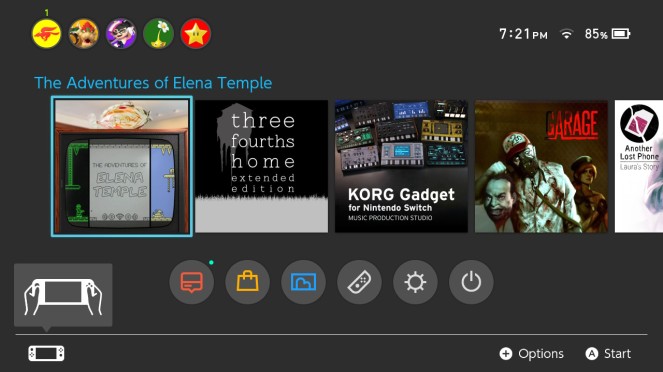 The story is a bit spotty as you just know that Elena Temple is looking for treasure and that is about it.

When you first boot up the game you will be given the choice between several different retro layouts. This to me is the best part of the game since you get to experience the game how you want to in terms of style. Then the game begins and it is a fairly simple game as you are presented with rooms. In these rooms there will be small platforming or puzzle elements. Each room has multiple coins to collect, sometimes bullets to pick up, diamonds that are required to finished the game or enemies to kill. It is a fairly simple game that will take a few hours to complete and longer if you want to 100% it.

This game is a bit weird to me since it tries to please gamers by providing retro styles to choice from. I think this is great even though I didn’t grow up playing most of the styles. I only had the gameboy, the restI didn’t really have or I had to use while in school. The problems with this game is things aren’t explained very well and good luck trying to collect everything. You will need to do this old school and draw out a map if you plan on obtaining the 120 coins. The map is by far the biggest offensive though as it doesn’t give you enough information to backtrack. If you have already unlocked all the maps you will have a rough time finishing those last handful of coins. It would have been great to get a check on each section if you 100% it. The last problem is the final area… I wasn’t sure if it was a bug at first or I did something wrong but I couldn’t beat the game. The wall slowly goes up but then it stopped around 75% up. So I was unable to beat the game. No matter what I did in the room it wouldn’t go all the way up. After restarting the game it had no issues and I beat the game.

The game is really basic and for what I believe was a one man job or small team is very impressive. Adventures of Elena Temple is an excellent call back with its distinct styles that I wish more companies would embrace. At its core it is a has the makings of a great game but is bar but trying to say true to the classics. Sometimes we must let go of the past to give something that is more modern. I would give Adventures of Elena Temples a 7 out of 10!

This game was pretty fun and great at first but once I was nearing the end things got rough. I felt like I was playing an old NES game again without a good map. I just wish it was possible to get a Check or something to show that everything in an area was done. Remember to check out the giveaway for this game over on the Nintendo Subreddit, it should be up sometime tomorrow and last through the weekend. As always I’ll see you in the next review!

One thought on “Nintendo Switch – The Adventures of Elena Temple #154”