Something felt a little strange about this game…

A little background about myself if you don’t mind. I have a degree in Music Education so music and playing piano have been my passion for a very long time. Singing not too much but every music school I went to forced us to be in the choir or band. Let’s Sing 2018 feels as though it is a step backward compared to the big two from days of old. I grew up playing those games in High School and College so being able to experience the joy of singing with friends was a great feeling. The only issue is I’m not sure if it is a Switch exclusive issue but I couldn’t get two microphones to work all the time. I purchased two Wii U microphones to test out for the game and found that both of them do work. When I plugged them into the Switch together, one would always die out. Sometimes it wouldn’t connect at all. Playing single player with friends was a great experience though but one mode was completely impossible due to not being able to use two microphones. I was informed that any USB Microphone would work for the game but it seems like the Switch dock is unable to handle two at once without issues. Other than that it is a fun game, lacks a ton of songs but the handful they did have was appealing to my friends and I. I would give Let’s Sing 2018, a 5 out of 10. 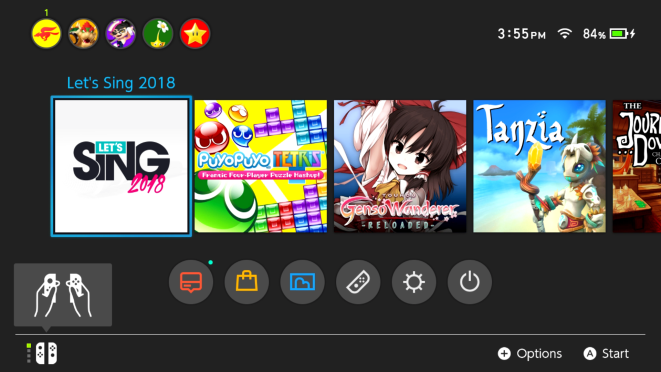 There is no story, this is a party music game.

The majority of the game you will be singing but the different modes is where the game shines. You have a mode that you need to fill in the lyrics while singing. I thought this mode was the best since you have to sing it correctly and get the words right. So you could know a song very well but if you don’t hit the right tone you lose the point. The classic mode which is just singing along with the song. Mixtape mode that has several verses and change mid song to another song. A sync mode that is the two player mode that I couldn’t get working with another player. You can play it solo against the computer.

The hardest part to accept about this game is the lack of songs. Even if you purchased all the DLC you wouldn’t have more than 60 songs. The game gives you 30 songs ranging from Queen to Maroon 5 to Lukas Graham but they are only top hits so if you are looking for a full range of songs you are better looking else where. From the 30 songs I personally only knew around 10 of them with 5 of them being songs I know enough to sing with no issues. It doesn’t help that the bulk of the songs were made in the last 5-10 years. One-third of them were from 2015-2017. I spent a good hour alone playing the night I got a microphone then went out the next day to test two players and was upset I couldn’t do both. It really is a shame that I’m not sure what is causing it. I was able to play with friends for several hours with us going back and forth but the list of songs meant we listened to some songs multiple times. I wish they took the time out to bring all the songs from different regions onto each copy. It would have been great to get a bigger range even if they were in different languages.

I really wanted to like Let’s Sing 2018. It bought back memories of Guitar Hero and Rock Band which I love so much but lacks in all departments. The Switch version has issues with multiple microphones plugged in, lack of songs that even with DLC wouldn’t fix since songs are $5 for 5 songs. May have been better to have it as $1 per song, I would have picked up the songs I did know for that price. I would give this game, a 5 out of 10.

Trailer: (Used the PS4 trailer since no US one exists and they use different songs in different regions)