I have a problem…. 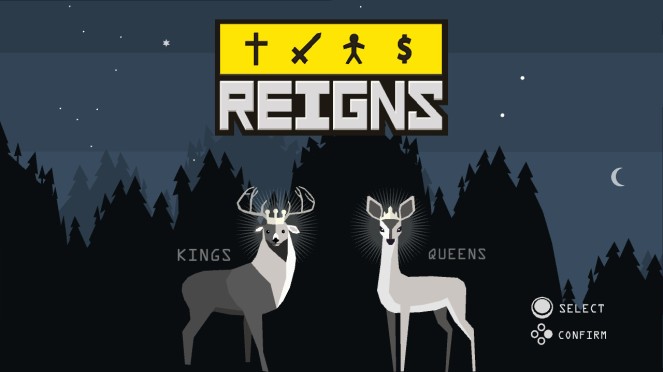 Reigns is a deck building game, where you are trying to keep the people happy but also slowly unlock new packs. These packs will be new helpers in the kingdom like a Doctor, Witch, Jester, etc. Both games are similar but one is from the standpoint of a king while the other is the queen.

To be honest… I have no idea how to play this game and that is why I love it. I don’t have any tips or tricks and even how to really progress the game. I typically try my best to keep everything pretty leveled and then BOOM! I decide why not go into the dungeon and fight a skeleton and die within my first year. The gameplay is all up to chance as Yugi would say “believe in the heart of the cards” since if the game wants you to lose, you will but when the game wants you to “win”, you will. There doesn’t seem to be an ending for this game which is why it is in the “Split Second” review since I’ve been playing for hours on the King side. When I died of old age, the game still started over with a new heir and the cycle repeated forever. I love just playing cards and seeing what happens, will I die the very next turn or will my brother-in-law kill me for the throne?

Is this a game I recommend? Yes and no… It is a tough game to recommend due to the nature of it. If you are a person who likes games like DnD then maybe since you have to put yourself in the mindset of this person to enjoy it. I think it would be pretty hard to enjoy this game if you are looking for an ending since it doesn’t seem to have one.

Will be uploading soon!