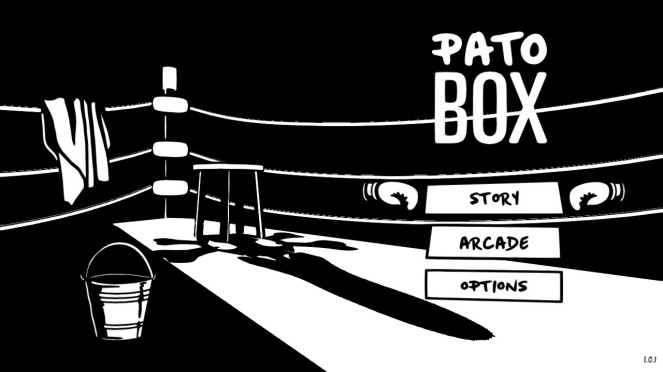 Pato Box is a very interesting game. The story mode was a surprise for me since I thought it was going to be a Punch Out style game starring a Duck. Booting up the game for the first time introduced me to deceit, lying, and a would be champ falling from the top. The duck aspect is the gimmick to draw people in which for me it did. Did it have to star a duck? No, since the game is pretty solid from beginning to end. Sadly for me outside of the matches the movement around the world is questionable. The first time playing I felt motion sick after an hour. While moving around the camera bops up and down slightly to give the illusion of a boxer bouncing during a match. After a while I got use to it but always felt a little weird after playing for a long period of time. In handheld it wasn’t as bad as sitting in front of a TV. This was the only issue I really had with the game so you really should watch someone play it for a long time to see if you feel anything otherwise it is great. The arcade mode is rough… you will need to do a lot of story mode stuff before you can tackle the first fight. This isn’t a Glass Joe, you aren’t going to punch your way through any fights. I loved the fights all of them are unique but I do wish it was possible to have local multiplayer as it would be great to use the boss characters. I would give this game a 9 out of 10, the bobbing was just too much for me at time otherwise it is definitely a 10 out of 10! I really can’t wait for a sequel!

The story is pretty simple for a game about a duck boxer. You start off in the ring against another boxer for a new title. After the first bell, you have a sip of your water and start the next match. You slowly start to black out during the match as you keep getting bodied by the boxer. Falling after a few hits, you wake up outside badly beaten up after you were dragged out of the ring and left outside. A friendly face shows up and helps you out and tells you that we have to get revenge for what they did to you.

There are two gameplay modes in this game you have the most standard Punch Out style, which is in the ring. You will dodge left, right, block, and throw punches. Only difference is there are no supers but that isn’t all. Instead of a life bar you will slowly get bruised and get scratches the more hits you take. Eventually you will start to blackout and if you take too many hits while in this mode you get knocked out.

The other gameplay style is a bit simpler but you will be spending a lot more time in it, which is moving around the world. You can interact with people and objects in different locations and travel to different areas to find your next opponent but the methods of getting there are puzzle based. Sometimes you will be required to clean out a room of objects by punching them. Sometimes you will need to destroy select items to proceed to the next room. Or you will need to collect and item and take it to another character to move on. After doing some of those things you will fight your next opponent until you beat the game.

If you decide that the story mode isn’t for you, you can go into the arcade mode but I highly suggest not doing that as it will ruin the story. Nothing is really spoiled by the fights have you play out some sections of the moving around the world sections. Take the first fight you will need to destroy generators, dodge lasers, and kill deadly robots. All of those things you deal with before taking on the boss so it prepares you for the first somewhat. You will know what each thing does before you start the first so you know, I can punch these things to destroy them or I need to dodge these things to not get electrocuted.

Even though I am a person that has beaten Punch Out, Super Punch Out, Punch Out Arcade, and Punch Out for Wii… This game didn’t hold anything back. There is no Glass Joe so you hit the ground running which I loved. I don’t like games that hand hold for have the game. Pato Box starts off strong and keeps going strong right up to the end. The final boss is hard but that is expected as each boss is hard in their own ways. Much like Punch Out if you don’t plan on doing the story mode, it will take several tries to understand the pattern. The best part about the arcade mode is that you can fight them Punch Out style back to back to back. If you lose though you do have to start over though.

Pato Box is an excellent game that hits all the nostalgia marks with a new coat of black and white paint. I was excited for this game when the trailer dropped, I was excited to see it was coming out in the summer, and up to the final fight I couldn’t put it down. I really hope a second game is in the works and this game does really well since it does do things right. If Golf Story can do Mario sports games right…. Pato Box is the game that will do the Punch Out series right. I would give this game a 9 out of 10! Even with the motion sickness during the story mode was a bit painful, it is more likely because I would sit and play for long periods of time. After finishing the game and taking on the boss rush mode, I didn’t feel anything so I think it is only bad during the story movement sections.

My Gameplay Footage: Starts at around 2:00… Sorry about that first Twitch Stream.

Keeping these short since I am going away next week, I will have internet but it will be limited or slow. Not sure about it at the moment so I’m just prepping as much as I can since I will be busy the entire time I am away. Remember to check out the subreddit for a giveaway: Click Here! Three ways to win a copy of Qbik! Check out my Twitter for the other way!